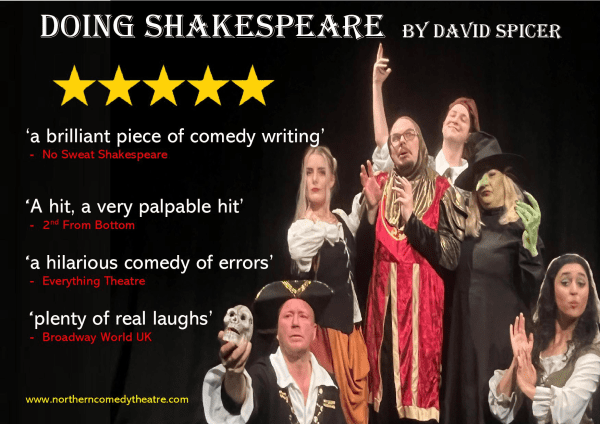 Following a critically acclaimed London run, DOING SHAKESPEARE now goes on tour. Six actors performing six different plays will do Shakespeare as Shakespeare has never been done before. David Spicer’s hilariously mad Shakespearean mash-up will have you rolling in the aisles and the Bard turning in his grave.
'A hilarious, farcical comedy of errors: Shakespeare meets Morecambe & Wise-style humour, with an energetic ensemble cast.' – Everything Theatre
The Northern Comedy Theatre have won 6 OnComms and a special OneOff award from OffWestEnd along with the SCENESAVER Birthday Honours Award for BEST ENSEMBLE. Doing Shakespeare has been nominated for an Off West End award for Best Costume Design.